Like many of our favorite casino games, the exact origins of blackjack are forever lost to history. One of the first recorded descriptions of the game places its appearance in France during the 17th century, where it thrilled gamblers under its simple, yet appropriate appellation “vingt-et-un.” Some gaming historians, however, contend that rather than originating in France, vingt-et-un was nothing more that a variation of Spain’s already popular game “One and Thirty” or perhaps even a spin-off of Italy’s Baccarat.

Regardless of its origins, so popular was the game that it quickly emigrated globally, taking on slight changes in both name and rules to suit regional appetites. In Russia, the game was called “Ochko” (roughly translated as “the hole’). In England, where players were rewarded for drawing both the jack and ace of spades as their first two cards, it became known as “Blackjack.” But whether it’s “21” “California Aces” or even “Ochko” blackjack continues to be one of gambling’s perennial favorites.

1. Players win if their hand has a greater total point value than the dealers, without going over 21.

2. The best possible hand is called a blackjack and it consists of an ace and any 10-point card. A winning blackjack pays 3:2.

3. If both the player and the dealer have a tie—including with a blackjack—the bet is a tie or “push” and money is neither lost, nor paid.

5. If either the player or the dealer exceed 21 or “bust” the hand automatically loses.

6. If both the dealer and player bust, the player loses.

A round of blackjack begins with the player placing a bet in the circle or designated betting area in front of him. Every player will then be dealt two cards (both typically face up) while the dealer receives two cards, one of which is exposed and the other (known as the “hole” card) face down. If the dealer has a ten or an ace exposed he will check for blackjack, in which case all player hands lose, except another blackjack. However, should the dealer have an ace exposed, players may take “insurance,” a side-bet that pays 2-1 and hedges the initial bet against a dealer blackjack.

Stand. If the player decides their hand is sufficiently strong, they may opt to take no additional action.

Hit. Players may draw additional cards until they either bust or decide the stand.

Once all players have acted, the dealer will then complete his hand. Unlike players, the dealer has no freedom to determine the best course of play and must abide by the house rules which govern all actions. Usually the dealer must hit until his cards reach a total value of 17 or more. In some casinos or game versions, if a dealer is dealt a soft 17 (an ace plus cards totaling six additional points) he must also hit. If the dealer busts all players active in the hand win automatically.

Despite its simplistic premise, blackjack is one of the most difficult games in the casino. But with an extremely low vigorish—sometimes reaching 0.18%–it can also be one of the most profitable. Or at least it is if you master basic strategy.

Although daunting and at times confusing, basic strategy it is really nothing more than a breakdown of the optimal way to play every possible situation based on the house’s rules, your current hand and the dealer’s exposed card. Below is a sample basic strategy table for use with multiple deck games. Remember, optimal basic strategy varies with the version of the game that you play, and there are tables such as these that outline exactly what action to take given the circumstance. And while they may be challenging to memorize, if making money as a blackjack player is you’re ultimate goal, there’s simply no other option.

A lot of new players can be taken in by seemingly sound strategies that actually have no real place at the tables. Avoid the following dangerously ineffective methods.

1. Play as the dealer plays. Some people think that because the house has an edge on the game that by playing according to the dealer’s rules (such as always hitting 16 or less, or never doubling or splitting) that same edge will apply. Wrong. Remember, it’s the player who acts first and even if both you and the dealer bust, the house wins the hand. Such strategy results in a house edge of approximately 5.5%

2. Martingale System. Some players advocate an age-old, misguided betting system design ostensibly to guarantee winning. Called the “Martingale System,” this method requires players to double their bet for every hand following a loss. The theory is that by doubling the bet you will eventually win a hand and recoup any previous losses. Although it sounds powerful, this system is flawed and ineffective, and fails to take into account high-risk bets, a moderately bad run of cards, and table limits.

3. Never draw to a hand that can bust. Rather than take a card that could break the hand, some players prefer to always stand pat on hard totals of 12 or more. Such play is harmful in the long run and results in a vigorish of approximately 4%.

Although these and many other half-baked strategies may sound good in theory, at best they’re mildly innocuous and worst devastating. Steer clear of tricks and systems and stick with basic strategy, the only proven method of minimizing the house’s edge.

Blackjack players share some oddities by John Grochowski   Given enough trials in blackjack, any hand that can be dealt …

Q&A With A Master

Blackjack Legend Don Schlesinger on His Ultimate Blackjack Strategy Cards   In our October edition of Casino Player, we …

Learning the Basic Blackjack Strategy By Don Schlesinger   For any serious blackjack player, learning the basic strategy of play (BS) …

Readers share their casino mistakes to learn by By John Grochowski   Everybody is a beginner sometime. We’re not hard-wired …

THE DOS AND DON’TS OF BLACKJACK STRATEGY

Tips for beating one of the world’s toughest card games By J. Phillip Vogel   Like many of our favorite … 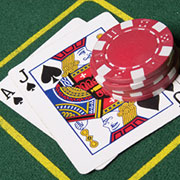 The essential steps to becoming an expert player By Henry Tamburin   If you’re a recreational blackjack player, you don’t … 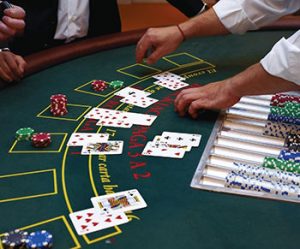 AND THE WINNER IS…

The Best & Worst BlackJack Games in Las Vegas  By OnlineUnitedStatesCasinos.com   Las Vegas holds a special place in every …

10 rules and rituals to play like the pros   Blackjack, also known as twenty one, is one of the …

Taking On The Tables

I HATE IT WHEN…

WHICH GAME IS BETTER?

Choosing the best version of blackjack By Henry Tamburin Has this ever happened to you? You enter a casino to …

Test your blackjack knowledge By Henry Tamburin Are the following statements about the game of blackjack facts, or are they …

By Henry Tamburin Note: I’ve received many inquiries from Casino Player readers about the new Ultimate Guide to Blackjack that …

How well will you do in this true or false challenge? By Henry Tamburin I decided to do something different …

The complete rules for playing that 12 By Henry Tamburin   A 12 in blackjack is considered a “ho-hum” hand; …

How Would You Play These Hands?

When to Wave the White Flag

The Price for Playing “Your” Way

How much do your playing errors cost you? By Henry Tamburin   So if basic strategy is readily available, why …

Decisions, Decisions: How to Play Your 18

Are you up for the challenge? By Henry Tamburin   The truth is, most typical blackjack players are suckers. Their …

The Road To Mastery

The Good, the Bad & the Ugly

Look Before You Leap in Blackjack

Everybody Needs a Sidekick

Five Ways To Get The Edge in Blackjack

Blackjack – How Would You Play It?

Testing your blackjack knowledge of tricky situations By Henry Tamburin   You’re at a blackjack table, and the dealer’s upcard …

Where to cash in on player-friendly blackjack games, and how to avoid the bad ones by Henry Tamburin The 6-5 …

A Million Reasons To Play

Tropicana AC wraps up its 30-year anniversary celebration with an astounding million-dollar blackjack event From now through February 19, excitement …

10 common “mythtakes” that players make at table games By Frank Scoblete On any given hand, and on any given …

Negotiating At The Tables of Blackjack

The Insider in Blackjack

The Blackjack Hall Of Shame

What are the chances of you doubling your blackjack bankroll vs. busting out? by Henry Tamburin   Do you think …

Over the long run, a small time investment can make a huge difference in your finances by Henry Tamburin   …

What Would You Do If…

Going By The Book – Blackjack Strategy

Mastering basic strategy at blackjack means more than memorizing a chart. It’s about understanding how to play offense and defense. …

NON-INTUITIVE BASIC STRATEGY PLAYS By Henry Tamburin   Most of the basic playing strategy for blackjack is logical to players. …

The fast, easy way to master blackjack basic strategy By Michael Shackleford   I play a lot of blackjack, and …

Where to find the best blackjack games in Vegas, and how to avoid the tricks and traps that take down …

Rules & Strategy Winning at Blackjack Like many of our favorite casino games, the exact origins of blackjack are forever …

Don’t Believe The Hype in Blackjack

Gambling at The Maxim, home of the perfect blackjack game Money was flowing in torrents everywhere you looked. It was …

Getting The Facts Straight in Blackjack

The right way to play blackjack isn’t a matter of opinion Interestingly, many blackjack players have read some articles or …